Two women Aged 103 and 82 Were Baptized in Bertoua 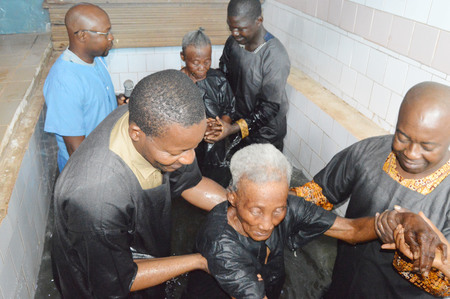 Mandarie Madeleine, 103, and Ongono Jeannette, 82, were baptized on October 30, 2021, at the end of an evangelistic program in Bertoua, in the Eastern Cameroon region.
The baptism of these two candidates was a joy for the church members. Their baptism was accompanied by cries of joy and praise to the Most High from the congregation, for these souls who said yes to Jesus Christ in their very old days. 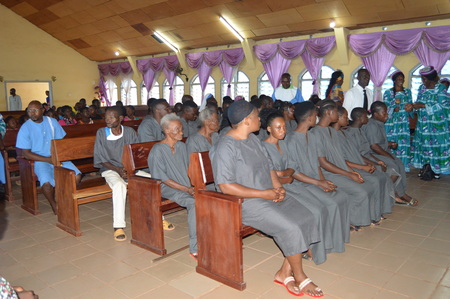 One of them, Madeleine Ongono, comes from Petit Ngaoundere, a locality in the Adamaoua region of Cameroon. At her young age, she was married but lost her husband who was from the village of Minkolong in the Eastern region of Cameroon. After the death of her husband, she joined her younger sister in Mbang, a village in the East of Cameroon. She and her younger sister Jeannette came to Bertoua to spend some time with their cousin Marianne, who became an Adventist two months ago.
They were amazed by the punctuality, the determination, the self-sacrifice and harmony of a small group that their cousin Marianne was attending. They became part of it and eagerly followed the evangelistic campaign that led them to baptism. The two sisters testified: "We have never felt so loved and at the center of attention. We have never experienced such love and power of truth in our former church.” They made Psalm 71:18 their prayer. "Now also when I am old and grayheaded, O God, do not forsake me, Until I declare Your strength to this generation, Your power to everyone who is to come."
David Metet, Director of Communication of the East Cameroon Conference (ECC), could not hide his amazement: "God has just demonstrated his omnipotence. With God, nothing is done at random. I conclude that the love of God is inexhaustible when the sins accumulated for a hundred years can be swept away in a second, there is something to stop before this indescribable love.” 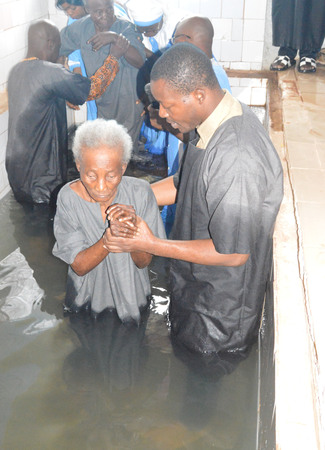 Mgbwaolo Wadje Gervais is the Pastor of the Bertoua-Centre congregation. He explains that "these two women were followed up by the elder Yakouba. They studied the Word well and did not resist the call for baptism”. This was very important because these two women cannot read nor write.
Beyond the Bible studies, the advice on health, the intercession of the prayer group, one of the highlights was the closing on Saturday, October 30, 2021 with 27 baptisms in Bertoua-Centre.
It is the fruit of the efforts of the Adventist Women's Ministries of the ECC. They held evangelistic crusades throughout the territory of the Conference from October 17 30, 2021 under the general theme "Christ Our Hope".
Pélagie Kéman, the director of women's ministries for the ECC was the main speaker of Bertoua-Centre site. She was overjoyed. "I share the joy that there is in heaven when a soul is converted. This baptism reminds me of the story of the robber on the cross who was saved in the evening of his life. I feel I have accomplished the mission”.
The East Cameroon Federation is part of the Cameroon Mission Union. It has 24,049 members worshipping in 471 churches and companies.